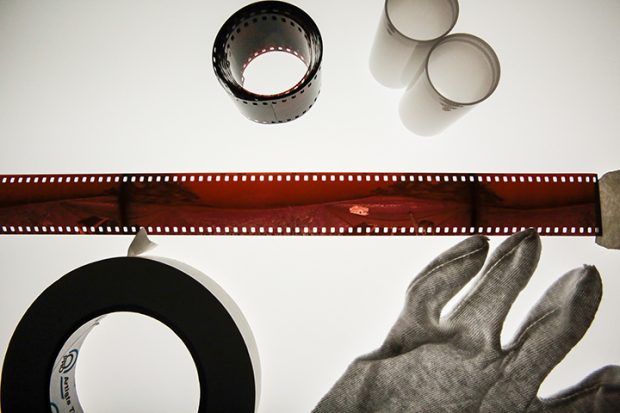 Know how long it’s been since I’ve looked at 35mm print film on my light table? Before I had gray hair!

A couple of weeks ago, I wrote about a new film camera I’d just purchased – a Lomography 360 Spinner (https://scottmeadphotography.com/spinning-my-wheels/). So far, I’ve had a blast spinning rolls of 35mm print and slide film and anxiously awaiting to have them processed. Here are a few of my initial thoughts.

1. Holy crap! Film is fun – I hadn’t shot 35mm film in a long time, and some of the things I’ve been lamenting (the anticipation of waiting for the development process or relying on your senses and knowledge instead of a histogram), I’m no longer lamenting. It’s also excited my drive to “get it right in the camera,” as each roll of film nets only eight shots.

2. Looking at the world in a whole new way – If there’s one thing that most photographers are guilty of (so says our significant others), is that we view our world one frame at a time. Everything is an image, and it comes in the shape of a 35mm, APS-C, 2-1/4 or other variations of a film frame. Now, I’m taking in EVERYTHING around me. Instead of a setting up one or two elements to be the primary focal points, there are now tens of foal points to consider. But now there’s a new major factor: The image no longer tells a story, or a chapter of a book. It’s now multiple stories, or an entire book.

3. That which is old is new again – Over the years of non-use, my light table became the repository of items I couldn’t bear to part with, or things I wanted to be out of sight and mind. My scanner sat under a cover, unplugged and caked in dust (with a couple gecko turds for good measure). I’ve since cleaned of the light table, and plugged the ol’ Epson 4990…

4. That which is old may be destined to the recycler – Ahhh. The 4990 scanner. Grinding noises and scans that resemble an Edvard Munch painting… if he were dropping acid. Yep. Not exactly what I was looking for. So I ended up getting a dual-lens, Epson V750-M Pro scanner. I also had to get a new bottle of emulsion cleaner and lint-free wipes and a pack of PrintFile negative sleeves, as I had tossed my supply years ago. Heck, I never thought I’d be shooting film on a daily basis again!

5. An edge-to-edge exposure? Sweet! – Okay, so exposing an image over the sprocket holes is different, and some call it stupid. In my book, it’s way cool as it adds another bit of dimension to the image, and there’s no doubting that you shot old school! Exposing the full width of the film does pose an issue: Scanning with a traditional film holder or mask is out of the question, as it overs up the sprocket holes. But Lomography has a solution in their DigitaLIZA scanner mask – an interesting film holder that uses magnets to align the film. It’s a great concept, but film tends to curl, and getting the film to lie flat is a tough proposition. So far, I’ve had better luck taping the film directly to the scanner’s glass.

6. One-one thousand, two-one thousand, three-one thousand… – My days of mixing D76 and developing my film are officially over, and film processing is becoming difficult to find (let alone finding film locally). Because there’s a decent learning curve with this camera (learning exactly what it captures, what its spatial relationship is to the scene you’re capturing, keeping the darn thing level, etc.), it’s easy to blow through several rolls of film in a matter of minutes and film processing costs can easily sneak up on you. Thankfully, print film is still pretty inexpensive, as is processing of print film. To wit: 25 rolls of Fujifilm Superia X-TRA 400, shipped to Maui is a mere $2.39 a roll. Processing is even a better deal at $1.66 (thank you, Costco). Slide film is a bit more tricky, as there’s no E6 processing in the State of Hawaii (I send everything to A&I in Los Angeles), but the most affordable slide film is found here on Maui at a tick over 10 bucks a roll.

So, I’ve invested in some additional equipment, and I’m paying for film and processing again, but is the expense worth it? Heck yeah it is! I’m havin’ more fun than a troop of monkeys in the spin cycle of a washing machine! I’m spinning through film, and learning the nuances of shooting with this cool little camera. Plus it brings me back to the primary focus of being a photographer, and having fun at the same time. Its 35mm ecstasy, baby!