A Scan Back in Time 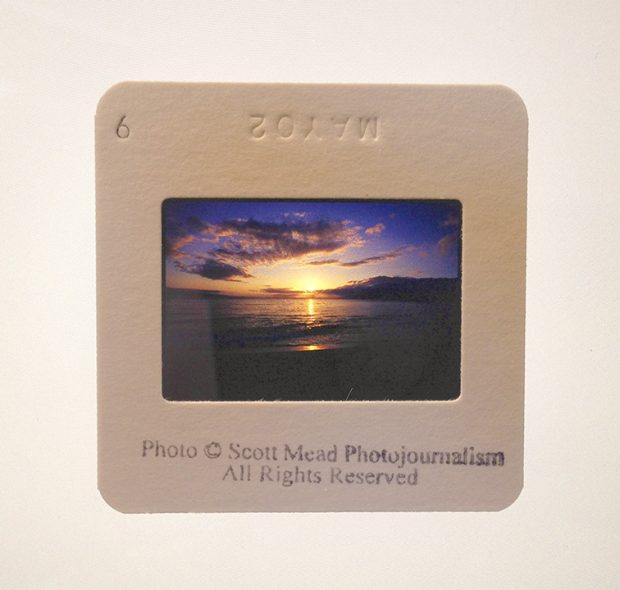 Pulled from the depths of a file cabinet: Sunset, Airport Beach, Ka’anapali, Maui, Summer of 1990.

I’ve been blessed to have grown up with camera in hand, and a family that support my addition to film.  Since I started capturing light back in the mid ‘70s, I’ve amassed a sizable collection of images, taking nearly 12 terabytes of storage on my server, four, 4-drawer file cabinets of sleeved slides and three large boxes of yet-to-be-cataloged-and-sleeved slides. Don’t ask me how many images total I have, as there isn’t enough ibuprofen in the world to cover that headache. Let’s just say I’ve got kajillion images.

The other day, I was chatting with one of my old Motor Trend cohorts about “the good ol’ days,” when we’d jump into new or pre-production vehicles, wring them out, take pictures, write the stories, and somehow got a paycheck out of it. Reminiscing about one particular trip to California’s wine country, I decided to go searching or some of the outtakes I’d shot and kept.

Rummaging through the hanging slide sleeves, I came across a group of images I’d shot some 20 years ago while visiting my grandparents here on Maui. There were shots of Wailua Falls before most of the water had been diverted for irrigation; Sunrise from Haleakala back when the bike tours would start from inside the park; and sunset in Honokowai.

The bulk of these images had been tucked away because the exposures were off, or I just didn’t think they were worthy enough to have a print made, at least without some serious darkroom time. But looking at them now, and working with the latest advancements in scanning and image processing, I wondered if maybe now’s the time to scan a few shots from the archive and breathe new life into them?

I walked over to my old light table, which I had stuffed into a corner of my studio many moons ago, and cursed myself for using it as catch all for miscellaneous “stuff” I hadn’t had the heart to throw out or donate yet. Twenty minutes later, the plastic cover was removed, both 5,000K fluorescent bulbs were warming up and I’d pulled a handful of slide sleeves out of the file cabinet.

Placing them on the light table, I felt as though I had time warped back to the early ‘90s. Peering through the loupe at each slide, I marveled at the tight grain structure I loved about shooting Fuji Velvia 50, the great contrast and vibrance the slides possessed. It also brought back a deluge of memories: The brown Ford Taurus station wagon that my grandparents had, which didn’t show the Maui dirt all that bad, but the rear hatch drove you crazy with an incessant squeak over every bump in the road; Having to dodge the Kiawe trees (and their thorns) at Airport Beach (The Honua Kai now resides upon the old Ka’anapali Air Strip) and freaking out after putting the 40th roll of film into the Canon A2 (after three days of shooting), and dreading the credit card bill after ordering two more bricks from B&H, and having them overnighted to Maui.

I selected a few images to scan, and fired up the Nikon CoolScan V ED and waited for the familiar “ba-boomp” tone from the computer telling me the device had been recognized, only the computer never “ba-boomped.” I grabbed my Wacom pen, selected Start, and then All Programs and scrolled down to…

I thought, “No worries. I’ll just pop in the Nikon CD and load the driver and software into my desktop and go from there.” It sounded good at the time, until I got an incompatibility error message. Ahhh yes, XP is 32 bit and Windows 7 is 64 bit. A quick trip to the Nikon Site and… “The use of Nikon Scan software with Windows 7 (any version), or Mac OS 10.5.x or later, or any 64- bit operating system (including 64-bit, 32-bit or Compatibility mode) is not supported. We suggest trying a third party software option such as VueScan from Hamrick.com or SilverFast software.”

Visiting the SilverFast Site, their Ai Studio 8 software best replaces the NikonScan software I had, plus offers the bonus of built in, automatic calibration – a necessity for accurate scans. ‘Cept I don’t feel like paying 300 bucks for software I will only occasionally use. Punching in the Hamrick Software site, I started looking at their ViewScan program, it includes everything SilverFast does, plus upgrades forever are free, and it only costs $80.00.

I downloaded the fully working trial, made a scan, fell in love, and bought a license.

The scans were incredibly accurate and crisp. Pulling the first one into Photoshop’s raw file converter, I was amazed at the detail I could pull out of the waves using the Clarity and Shadows sliders. With minimal effort, I was able to transform the image into a sellable piece. So now I’ve put an addition to my to-do list: Scan back in time.

Soon, I’ll plug in the automated slide feeder, drop in 50 chromes and let the CoolScan do its thing and play with some images from the past. I can’t wait to get a hold of the slides from the 70’s. It’ll be fun to relive a part of my youth, this time without acne!