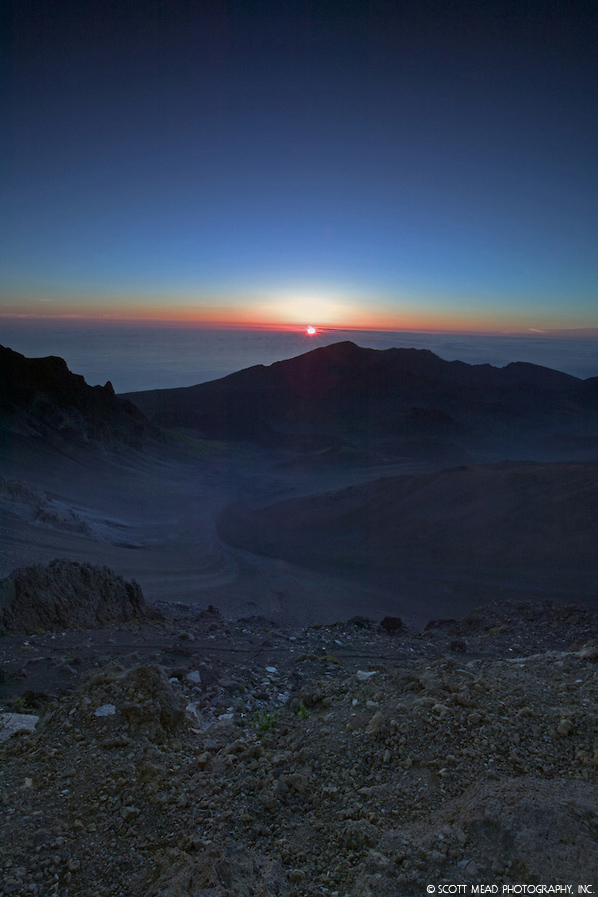 Haleakala Sunrise: An incredible experience that thousands of people will miss.

I have a new popular print at my regular art show, and it’s being called a consolation prize of sorts. It’s snatched up by people from throughout the US and Canada, to visitors from Australia and host of European and Asian countries. The image is a sunrise at Haleakala, and they’re buying it because the House of the Sun is closed.

Yep, Maui’s number one attraction, and one of the most culturally significant places in Hawaii has locked its gates, joining the other 58 National Parks that have been temporarily shuttered due the US government shut down. Take into account that Maui typically sees 175,000 to 250,000 visitors each month, depending on the time of year, and Haleakala sees over 92,000 visitors during the same time period. It’s disappointing, to say the least, especially when you think of all 533 members of Congress are still receiving pay checks (about $14,500 to $19,225/month before taxes).

So let’s do some simple math: If the members of Congress were getting paid, there would be over $7,728,500 (providing they all made the minimum $14.5K/month) available – granted, that’s not much in the grand scheme of things. However, admission to the parks requires a fee. At Haleakala, it’s $10 per vehicle (with other rates for motorcycles, buses, etc.). So let’s just say that if every car has two people, you’d have 46,000 entry fees at $10 a pop, so the Park brings in $460,000 per month, and there’s extra coming from concessions.

A bit of trivia: Did you know that the National Parks make 10-times what it costs to run them? (http://www.adventure-journal.com/2012/03/national-parks-create-10-times-the-dollars-they-cost/). If you think about it a bit, what if Congress forwent their salaries and the National Parks reopened? Millions of visitors could revel in the natural wonders and over seven million dollars could go to other needed programs that have also been shuttered.

Too bad that’ll never happen. Our National Parks are just a pawn being played on the chess board of democracy. It’s sad that 533 people are selfish enough to shut out millions of people from our natural wonders, and get paid for doing it.