Don’t Judge a Book by its Cover, or You Might Have an 11-D Mouth 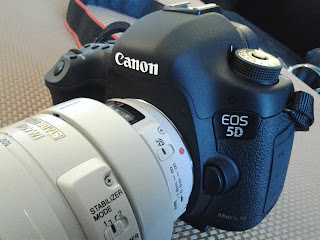 Several weeks ago, I blogged my dismay of the new Canon 5D MARK III’s specifications (Canon: Whiskey Tango Foxtrot), which at first blush, showed no significant upgrade for an outdoor photographer – especially a 1MP increase in sensor size.

After speaking with Canon’s Michael Nadler at the Palm Springs Photo Festival, and having some hands-on time with the camera, It’s obvious the camera’s specs barely scratch the surface of what this new body is capable of.
Thus, I have removed my left 11-D Columbia hiker and have inserted it into my mouth.
To be blunt, the camera is amazing. The processing and thru-put is blazing fast. Color rendition and shadow contrast is wonderful. And in low light, it’ll blow your mind away with incredible sharpness and eerily lack of digital noise.
According to Michael, Canon makes it all happen through gap less micro optics. Essentially, up to now, there were small gaps between pixels. Canon’s redeveloped their pixels so that there’s no gap, so the entire sensor can be used, with larger pixels to capture an image. In fact, the new CMOS sensor in the 5D MARK III (and 1DX) captures about 1/3 additional light than previous sensors. The results are sharper images, better clarity across the board and reduced digital noise.
Testing the MARK III against my tried-and-true MARK II revealed better contrast resolution, greatly reduced noise at ISO 400 and image thru-put (from the time the shutter is depressed until the image is fully written to the card) is nearly cut in half.
In a nutshell: Yes, Virginia. It blows away the 5D MARK II.
Where the MARK III really shines is in shooting sunsets: In my style of shooting, there’s a delicate balance between depth of field, diminishing light, and motion, which dictates a dance of decision between an extremely long shutter at a low ISO (for a relatively noiseless image, but a completely blurred motion of water) or a moderate ISO that permits me to slow the water’s movement (without making a foggy mess), but leaves the image with a noisy background. With the 5D MARK III, I can now advance my ISO comfortably to 800 + and retain a clean image.
Some of the forthcoming accessories are even more amazing. For instance, the new wireless file transmitter (WFT-E7A) supports the wireless IEEE 802.11n protocol, which promises file transfers up to three-times faster than the a/g protocol used on older WFT units, the transmitter also includes an internal Bluetooth function for connecting to third-party GPS devices, and I don’t doubt we’ll see a firmware update at some point and time that would allow for remote capture via Bluetooth connected device (think iPad or Android smart phone). The new Wireless File Transmitter also supports DLNA (Digital Living Network Alliance), so you can check out your images on a TV or mobile device.
So don’t be fooled by the spec sheet. The 5D MARK III is the supercharged version of its predecessor, and I’ll be posting images soon of what this camera can do… now that a MARK III resides in my camera bag.