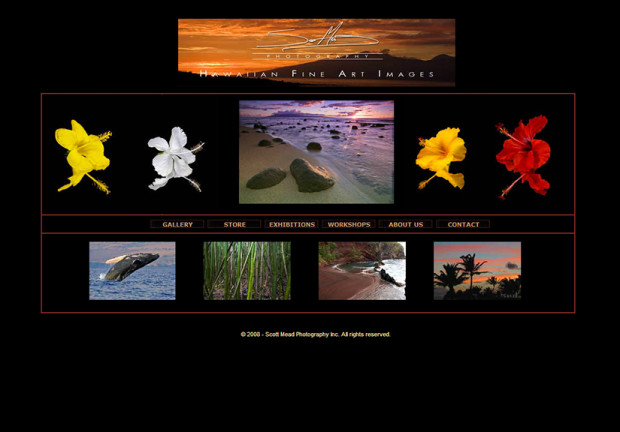 The Old, Old Site, circa 2008. Not that pretty, and clunky as an AMC Pacer

If there’s one thing trait that tends to befall right brainers, or artists/artisans, is that we want to have creative control over everything. Not an item here and there, but full-out, both-feet-in, full-tilt-boogie control.  We create our art, make our web sites, design our brochures, update our blogs and send out our email newsletters. And we think we can get it all done in one day.

There are a few big obstacles to overcome. The first being that there’s a mere 24 hours in a day (and most projects require at least double that amount of time). Second, is by trying to do everything, we become a jack of all trades, and a master of none. Then there’s the king of the trifecta: What we don’t do gets relegated to the next day, month or year, depending on the level of procrastination.

Well, there is another one. Remember as a kid, when your mom would tell you to share your toys with your little brother or sister? You’d let them hold onto your baseball until mom was out of range, and then snatch it out of their little hands. Why? Because it’s MINE! Go get a rock and play with that. The baseball’s MINE!  Mine, mine, mine!

Which reminds me, I think my sister still had that baseball…

One of the toughest things I’ve had to do is to relinquish control, or learning to let go. Like surrendering the remote control to the TV, sometimes you need to let people help, or hire out certain jobs to specialists. Getting an accountant to setup and take care of “The Books” was a big step. I would spend hours (which felt like days) pouring over the numbers, and always with a bottle of Excedrin Migraine on my desk. The bottle is now in the medicine cabinet where it belongs, and my accountant gets the books done in a fraction of the time I would take, and they’re done right! Let’s face it: I’m a right-brainer, and the left side just gets peeved when it’s asked to do a lot of math.

Similarly, I’ve designed my own web site for years, but lately, I’d pushed updates to the back burner, and essentially turned off the gas. My web presence was beyond stale, and the search engine metrics showed it. So with a bit of separation anxiety, I handed the reins to a Web developer.

It wasn’t the first time I’d let someone else build my Site before (actually twice), and each time was a disaster. The first had so many bugs (issues), I felt like calling Terminix to get the server tented. The other never made it to launch – it wouldn’t work no matter what the “designer” did (Joomla’s up there with Lucas Electrics – The Prince of Darkness).

Looking over my site, The Web Dude noted what parts could be reused, the parts that needed tweaking and others that had to be tossed and new sections built. The process was kind of like restoring an old Mustang: Clean and paint the chassis, rebuild the V8 and install NOS trim pieces. The result being a Site that looks great runs circles around the old one and is dead-nuts reliable. So instead of the three separate linked sites I used to have (the home site, blog and shopping cart), it’s now one big umbrella, which is what search engines really like. The best part of the whole endeavor: the new site was up in a couple of weeks, where it would have taken me a month (or more) to do it on my own… and a Costo-sized bottle of Excedrin Migraine.

There is one big kicker to learning to let go, and that’s freeing up time to get projects done that never seem to get finished, and undertaking the tasks you’re best at, and truly enjoy doing. In the time it took The Web Dude to overhaul the Site, I was able to process and keyword a six-month backlog of images that had been languishing on a hard drive.

Now, if only I could outsource dish washing and trash detail…