The Power of the Photograph 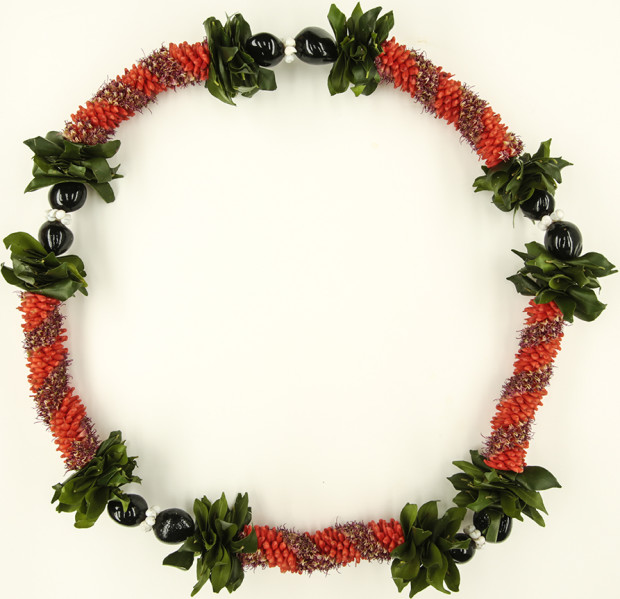 Would you buy this lei off a web site, just by looking at this picture?

Last week at one of my regular shows, a fellow artist asked me for some advice on taking pictures of their work. They went on to explain that they needed good shots for marketing materials and their web site, and that they had tried taking pictures indoors, outside, on their lanai, but they never looked great, only okay – especially when viewed online. Looking at their images, I could immediately see the problem: everything was hand-held, harsh light and the backgrounds were competing for attention with the work.

We sat down with a cup of coffee in hand, and I started to outline the basics:

First, never underestimate the power of the photograph, especially when the focus of the image is to call someone to action. Photography plays a huge role in doing just that, whether it’s an image of a sports car on a twisty road for a Porsche ad; one of Robert Glenn Ketchum’s indelible images of Alaska’s Tongass Rain Forest (which literally jump started nation-wide support for congressional approval of the largest timber reform bill in the history of the United States) to save 17 million acres of old-growth forest; or an image of a local artist’s jewelry on their Facebook page with the hopes of selling it to a fan of their page.

When Frederick Barnard coined the phrase, “a picture is worth a thousand words” in 1921, he was closer, and farther from the truth. Depending on how the subject is lit, the image is composed, and the focus, an image may conjure up a couple words, or even millions. An image can compel someone to pull out their credit card no matter the price, or tell their friends to never buy a particular item.

A photograph can also be misleading. Take your local fast-food restaurant for example: The menu board depicts mouth-watering burgers, larger than your hand, expertly crafted with the perfect amount of condiments, made fresh and steaming hot. You order that magnificent looking Double Bacon Gut Popper, and your salivate uncontrollably waiting for your order… that you have in-hand a mere minute later. You open the carton to find a burger that’s little bigger than a slider, and with less moisture than beef jerky. Sure enough, it has bacon on it, but it looks like it was harvested from a plastic pig. Add the wilted lettuce, blobs of catsup (replacing the tomato that they ran out of) and two onion rounds smashed between the halves of a day-old bun, and your appetite shrinks to the humidity level of Death Valley in August. You look at the burger in your hand, then the photo on the board, and the real deal looks nothing near the image on the board, or what you had in your mind.

But the photo got you to buy the burger in the first place, Right? Ahhh… The power of the Photograph.

Properly photographing your items is not a daunting task, though it does take an investment in time, and a little money. What you’ll need depends on what your shooing, and size does matter – jewelers can get away with a small setup, while 3D artists will need a bigger kit. Let’s start with a basic check list:

In my next post I’ll go over what lights to use for your type of work, setting up the shot and capturing images that will make your pieces pop on paper and the web.