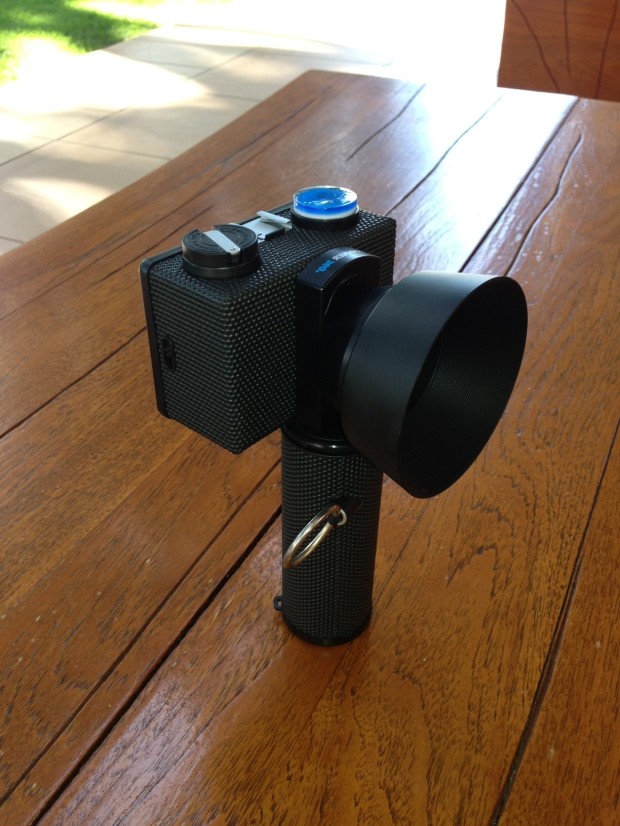 It’s not often that I get to plop my body down on the sofa, turn on the boob-tube and chillax. I’m way too busy to get any real TV time. So when I do grab an adult beverage and put my feet on the coffee table (c’mon, it’s really an oversized ottoman), I usually grab the remote to the DVR and watch one of our pre-recorded favorites: NCIS, Formula 1, WRC Rally, Burn Notice or Gas Monkey Garage (see a theme here?).

Earlier this week, I finished a long-term project, and instead of going straight to the next item on the “To-Do” scroll, I pulled a cold one from the “Beerigerator” in the garage, sank into the aging couch, and flicked on the tube. Pressing the “List” button on the remote, I noticed that my wife had added a new show to the recording list: Tech Toys 360 on Discovery’s Velocity channel.

“You should really watch that,” my wife called from the kitchen. “There’s a segment that’s right up your alley.”

I hit the play button, and soon a Maserati GranTourismo is flashing across the screen.

“What? You wanted me to watch a piece on a MAS GT? Been there, drove that and got the uncomfortable fitted t-shirt!” My voice rising above the pounding background music, and British voiceover, who couldn’t properly pronounce the Italian city of Modena even after a week of Italian diction lessons, or a couple pints of Bass.

“No, you doofus,” she laughed. “Fast-forward to the camera thingy.”

I punched the FF button, and the Maserati started driving at autobahn-plus speeds. A couple minutes later, a funky-looking camera with a hand grip appeared on the screen. I quickly mashed the play button and within seconds, I was mesmerized.

The camera being featured wasn’t digital. It took a roll of 35mm film. It was fully free of electronics, meaning there’s no light meter. The lens is fixed-focus, as well as the aperture. Basically it was just like my first camera, a Kodak Instamatic X45. But this camera had one big difference: It shoots 360-degree panoramas.

Built by Lomography, the Spinner 360° is fully mechanical and based in part upon the Globuscope from the early ‘80s. That decade saw the spawning of several 360-degree cameras to come out of Switzerland, including the Alpa Roto 70 and Panoscope.

Exposing images is super simple: Load your favorite roll of 135/36 print or slide film. Select the sunny or cloudy setting on the body to set the rotation speed. Hold onto the camera’s handle, or attach it to your tripod, then pull the ring cord and let go. The camera spins a full 360°, capturing an image about nine-frames long (you get about four panos per roll).

The cool thing about this camera is that it exposes the entire width of film, including the sprocket holes, literally exposing outside the box. This can make scanning the film challenging; a most scanner masks cover the sprocket holes. Thankfully, Lomography has a solution in the form of a special universal scanner mask that allows the film to be scanned edge-to-edge.

At the commercial break, I think I paused about 15-seconds before I grabbed my tablet, pulled up the Lamography Site and placed an order.

A few days later, a box arrived at the Studio. I could feel the giddiness building as I reached for the box cutter – like a child opening a birthday present – and retrieved my new toy. Let me tell you, black plastic never looked so cool. I walked to the refrigerator and pulled out a canister containing a roll of acetate with silver halide crystals attached.

There are two words that accurately describe shooing with the Spinner: Wicked cool.

With a roll of 100 ASA print film loaded, I shot my first test roll, and held, on the grounds of the Wailea Beach Marriott, Secret Beach and at sunset at Ahihi Bay. Every time I pulled the ring cord, I could hear Dead or Alive playing You Spin Me Around in my head.

Like shooting with my Pentax 645, there’s no LCD on the back, no histogram to view, and no preview to give you the comfortable feeling that you’ve got the shot. Instead, you expose with reckoning, feeding on your knowledge of light and composition. You also get the full-fledged sense of anticipation, as you have to wait to have the film processed, to see the fruits of your labor.

Speaking of processing: You can take your exposed rolls to any lab that develops print film (C41), but you need to tell them not to cut the film, as they’ll be slicing the middle of the panorama. You can also shoot slide film (E6), but again, you don’t want the lab to slice, dice and mount it.

I’ve got two more rolls of print film to put through the Spinner, and then I’m off to our local Costco to have the film developed. And I’ve already asked if they can process only. No cutty cutty. We’ve got the green light.