Crying through a Snorkel 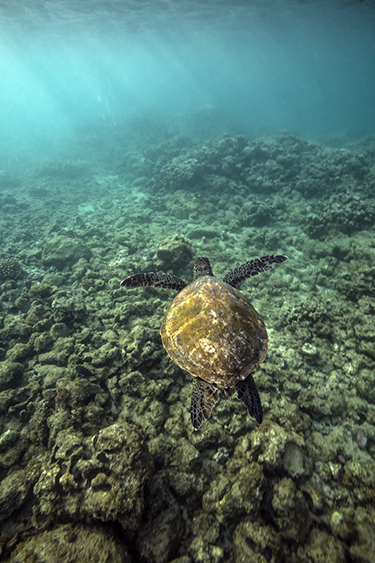 As you’ve all probably noticed, I haven’t written a decent blog post in a while, and it’s not for lack of desire. Rather I’m going through a Photographer’s mid-life crisis. I’ve honed my craft and understanding of light and atmospheric conditions to a point where I started feeling like shooting a sunset was almost rudimentary, and waterfalls and waves were no-brainers.  I just didn’t feel… challenged.

This has led me to throw the gates of creativity wide open, break all the rules, and try things I never dared to do with a camera: One of which was renting an underwater housing, and shooting the landscape of the ocean’s floor.

When I was a kid, if I wasn’t taking pictures, my grandparents had a hard time keeping me out of the water. Everywhere we went, I always had my ScubaPro mask (with a nasal purge valve that leaked like a sieve), snorkel and fins at the ready. Back in the late ‘70s, the reefs were teeming with coral, fish and cool creatures, and I hit all the great reefs of the beaches of Napili, Kapalua, Black Rock, Airport Beach (in Ka’anapali) – you name it, I probably snorkeled it. So when the housing and dome port arrived, I felt like I was 12 again, getting ready to check out a new world under the waves.

It had been a long time since I had donned a mask and snorkel. The last time was almost four years ago at Kealakekua Bay on the Big Island. My wife and I had kayaked across the bay to this snorkeling hot spot, and in my hate to get into the water, we overturned, and my gear sank to the ocean floor. At least I can say I helped start an artificial reef.

So with camera and housing, but sans gear, I went to see my friend, John, at Maui Dive Shop, who “fitted” me with a new mask with optics to match my Coke bottle prescription (fitting a mask to your particular facial shape is imperative to getting a water-tight seal), and a new breathing tube. Loaded for bear, I headed to Keawakapu Beach, and the reef fronting the Mana Kai.

The coral reef was everything I remembered it to be, a veritable maze of green, yellow, pinks and purple colors, the Cauliflower, and Lobe corals, Pencil, Pale Rock, Blue/Black and Banded Urchins, plus a myriad of fish, like Triggers, Parrots, Tangs. I found it hard to curb my youthful enthusiasm, and concentrate on framing, shooting, and working with the current. Back on the beach, a quick review on the LCD revealed decent results, but my technique really needed honing, and I needed to work on setting myself up in the right position, letting the waves and currents propel me into the shot. Nonetheless was hooked, and eager to get back in the water.

The next day I was back in the water with fresh batteries and clean memory cards. I put my corrective plan into action, and finally got some shots that were worthy of being “keepers.” I also decided to have some fun, attaching the housing to an old Manfrotto tripod, and getting some cool over/under shots, and sunsets with the camera in the water.

Giddiness took over, and my “creative soul” was being fed by the bucket-load. Remembering the fun I used to have at Kapalua Bay, I headed to the West Side the following afternoon. At nearly four in the afternoon, the beach was already crowded with three weddings in progress, and another four were waiting in the wings. I donned my gear and headed into the sandy shallows. Dunking my head below the waves, my eyes and brain started a raging battle of confusion: My eyes showing me a desolate lunar-looking landscape, and my brain screaming in disbelief, “Where’s the color? Where’s the coral? This isn’t what I remember… maybe if I swim out a bit…” Going out further into the bay only showed more of the same: What was once an incredible reef, lined with coral gardens, teeming with fish, and a wide array of invertebrates was now essentially, a wasteland.

Remaining were a few hardy Cauliflower coral, but most of the Lobe coral was reduced to dead or dying formations, covered in silt and thick with algae. A couple Honu (Hawaiian Green Sea Turtles) grazed on the graying forms, accompanied by three Black trigger fish seeking sustenance. My vision through my mask blurred, and at first I thought it was from an injection well bloom, but then I realized it was tears.

I spent almost 90-minutes in the water, traversing the majority of the bay, finding small groups of fish at its outskirts, and the occasional bloom of coral. While it was disappointing to see this once beautiful reef decimated by silt runoff, metals and lack of nutrients, it was encouraging to see some signs of the local habitat emerging, and in a few remote places, thriving – Through the tears, there is hope.

The following week, I popped for a full rig, and starting next week, I’ll be shooting and taking my imaging to a new realm. I’ve already decided to leave no proverbial stone unturned, for there’s beauty in everything, even a dying reef.