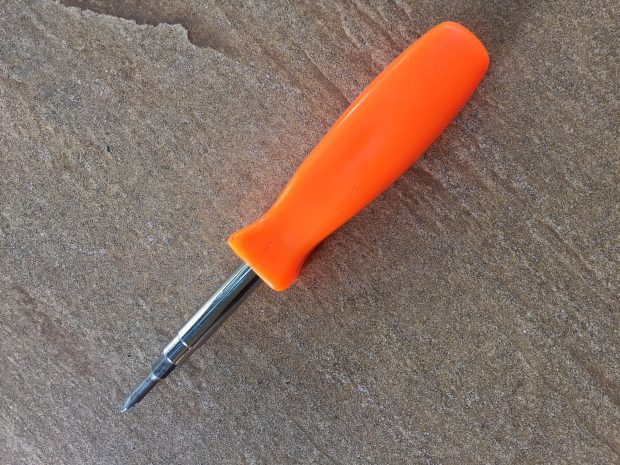 The Innocuous Screwdriver – Fixer and Destroyer

One of the best and worst things about my “job,” is giving advice to aspiring artists. Those of you who REALLY know me, know that I don’t sugar coat things. I wear my heart, and my experiences on my sleeve, and any advice I give will include the good, the bad, and the (sometimes) ugly. More often than not, people want to hear how “easy” it is to start a small business as an artist, or that there are bountiful riches to be had, and if you show it, it will sell. But starting a business, based upon your passion (which is what every business should start, in a perfect world), is a leap of faith, fraught with trials and tribulations, combined with incredible joy, and self-satisfaction.

In these conversations, I like to start with a general overview of what to expect in “life 2.0” as an artist – Be patient yet persistent, stay true to your art/vision/uniqueness, and that yes, you’ll have bad “sales days,” but that one person the following day, who falls in love with your work and becomes a regular patron, makes it all worthwhile.

When I finished my 15-minutes of blabbering, she asked a poignant question: “Have you ever had to deal with any unpleasant clients?” I bit my tongue, let a slight moan escape my lips. “I don’t care what form of business you’re in,” I noted. “You’ll ALWAYS have a few bad apples to deal with. Some will be rotten to the core, others slimier than an eel, just don’t let those few ruin the whole bushel for you.”

I knew the next question that was coming, and it was impossible to dodge it: She asked, “What bad apples have you had to deal with, and… can you give me an example?” The groan from my lips was a bit louder this time. She was about to open Pandora’s Box, but I felt the need to offer a choice in the level of severity. “You want the bad, the ugly, or mega fugly?” She chose the latter, and I suggested we get some coffee, we we’d need it, and maybe a margarita later.

A couple years ago, a newlywed couple purchased a custom piece, specifically sized to their room, and negotiated to be a one-of-one edition, delivered to their door. Given the size (the largest that I had ever produced), custom framing, and that this was a one-off, the item was priced accordingly, non-returnable, and the couple paid in full. Two weeks later, the image was crated and shipped to a very small town in north-east Canada.

A week later, I received a call from the buyer stating that they no longer wanted the artwork, and that they wanted a refund. I reminded him of our “one-of-one, no refunds” conversation, and that the receipt clearly states “ALL SALES FINAL,” which resulted in a string of profanity from the other end of the line, and the “KAAAWHHAAAAP!” of  a phone being forcefully placed back in the cradle.

The next morning, I received a call from the gentleman’s attorney, informing me that if I didn’t refund his client within 24-hours, he would file suit against me. I repeated the terms of the sale, and that he could not simply return a custom piece because of buyers’ remorse.

“There’s no buyer’s remorse in this case,” the attorney said. “The item received was damaged, and my client alleges you won’t remedy the situation.” I told the lawyer that this was the first time I had heard anything about shipping damage. I asked him to have his client photograph the damage to the art and the shipping container, and in the interim, I would have another piece made immediately, and sent diectly. The attorney agreed this course of action would remedy the situation.

Twenty minutes later, my phone rang again, this time from the buyer. Between F-bombs, he told me he had spoken to his attorney, and he didn’t want a replacement piece, he wanted his money back, stating he didn’t give his lawyer authority to “negotiate a deal” with me. He further demanded a cashier’s check be sent to him within 24-hours, via FedEx, or he’d have his attorney sue me and the venue.

At this point, I realized that no matter what, this person was in an irate state, and while there was nothing he could legally do, I had to consider my cost in time and effort to defend myself, plus loss of company revenue to take care of this. So I gave him a take-it-or-leave-it deal: I would have a cashier’s check cut in the amount of the original payment plus duties, sent via FedEx within 24-hours. He would ship the piece back to me, at his cost, via same carrier as it arrived (UPS Ground), within 24-hours after receipt of his check. We verbally “shook” on the deal, and ended the call.

I raced to the bank, and 15-minutes later, with cashier’s check in hand, headed to the local FedEx hub, and got it on its way before the daily cutoff. From the front seat of my truck, I emailed the gentleman the tracking number of his envelope, and noted that he would have it well within the 24-hour window. For the first time, he thanked me.

My studio line started ringing off the hook at 4 AM, and I finally picked it up a couple hours later, grimacing at the Caller ID. “WHAT THE (F-bomb) ARE YOU TRYING TO PULL HERE,” he yelled over the phone line. “Do you have ANY idea what UPS wants to ship that (F-bomb) piece of (S-bomb)?”

I took a deep breath, and calmly told him that we had made an agreement. He was in possession of a significant amount of money, which he received in under his demanded timeline. If he decided not to ship the piece, my attorney would be contacting him to discuss the breach of contract, AND we would be reporting the art as stolen with the RCMP, and would provide them with his name and address. My ear drum rattled from the “F-BOMB YOU” before the line went dead. An hour later, I received a shipping notice from UPS. The piece was on its way.

Unfortunately, the story didn’t end there. A week and change later, the crate arrived, and upon pulling the piece out, it was readily apparent the “damage” hadn’t happened in transit, but after it arrived at its initial destination: At the lower-left corner of the frame, you could see where a large flat-blade screwdriver had been jammed between the aluminum image and frame, then torqued up to pry the image from its aluminum mount.

To create the damage must have been a chore, as the adhesive used to bond the two pieces together is rated to 250-degrees and 4,500 psi tensile strength. I’d hate to think what the screwdriver he used looks like. To say the piece was damaged beyond repair is an understatement.

The look on my guest’s face was one or the books, eyes larger than saucers, and mouth agape. “You’re kidding, right?” she stammered. With a slight chuckle, I replied, “I wish. You can’t make this stuff up,” and I reached for my iPhone. As I swiped through the images of the damaged piece, I could see her face wince. I reminded her that this was the worst of the worst, and that for the thousands of pieces I’ve sold over the years, I’ve only had about a half-dozen really bad experiences with clients. There are some people who will use lying, cheating or deception to get what they want, but take the high ground in these instances. Believe me, it’s tough, especially in the heat of the moment.

Like I tell experienced and aspiring artists alike, and remind myself on a regular basis: You will have wonderful experiences and make amazing connections with people while selling your art, but you’ll also have those that leave a bad taste in your mouth from time-to-time – it’s the nature of the game. The key is to not let a bad apple here and there spoil the whole crop. What matters most is that you’re shooting for yourself, feeding your creative soul, and loving every moment of it. Whiners and weenies be damned!