Listening to Your Inner Voice 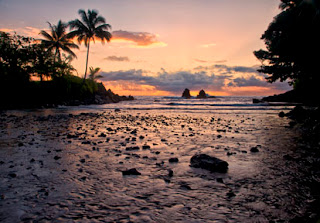 “Hey Man,” my Little Voice said. “Are you sure you wanna even go there?”
I shook my head, trying to ignore the little menehune that was trying to talk some sense into me. It was 5:34 AM. The sun was rising and casting beautiful, warm light into the mouth of Onomea Bay where it merges with Onomea Stream on the Hilo side of the Big Island.
At the time, I wasn’t happy with my choice of shooting location – a little too much up stream, and there was a large lava outcropping that was throwing the composition off. I had decided to wade into the stream with my camera, tripod and bag full of gear. That was the moment my Inner Voice decided to question my intentions.
I mean, c’mon! What could happen? The stream was only about 20 feet across and maybe six-to-eight inches deep. I had my trusty hiking boots on, so what could go wrong? Besides, I knew the other side of the outcropping held the shot I wanted.
Tentatively, I put one foot into the cool water. The rocks in the stream bed looked clean and clear, holding my weight with minimal movement. I took another step, then another, and a few more, my confidence growing with each stride.
Getting astride the honkin’ chunk of lava that was in my way, I had a fleeting mental note spark in my gray matter: Around the other side of the lava, the water movement was decidedly slower. My Inner Voice piped up, “Dude, this has BAD written all over it. Slow down and watch your footing, otherwise you’re goin’ for a swim!”
Again, I ignored my Menehune. All he does is talk too much anyway. Do this. Don’t do that. Blah, blah, yadda, yadda whatever!
The next step I planted in the water started a cascade of events, all in slow motion. I had stepped on a moss-covered rock, with traction on the negative side of the scale. My right leg slipped forward, while the left ankle twisted on rocks giving away. Instinctively, I raised the camera and tripod high into the air as my left knee came crashing down on coarse lava rocks, about 10-inches under the water’s surface.
Trying to get up, I found my left leg was darn near paralyzed from the shock of the impact. And yes, a 45-pound camera pack does not help the situation! I clambered to the side of the embankment, and watched the water turn an unfortunate pink hue. I took a quick assessment: Both shins skinned from knee to ankle, the left knee already swelling beyond the size of asoftball, and there’s a big dent in my pride.
Realizing I wasn’t going to die any time soon, I placed the camera and tripod into the shallows, pulled a split ND from my bag and shot the sunrise. After all, I wasn’t gonna give up an opportunity to shoot, at least not that easily!
As the sun rose, and the shadows got longer, I packed everything up and drug myself up and over the lava outcropping, slithering down the other side towards the trail. There was no way I was gonna venture into the stream again that day! I now had a long hike back to the rental car, and I figured I’d get nailed for the extra cleaning fee, as I was covered, head-to-toe, in Onomea mud.
Twenty-minutes later, I made it to the car. I popped the hatch, swung the camera bag in the back, grabbed a bottle of water and started washing off my wounds. The knee had swollen even more. I was taking a long draw off the water bottle when my Little Voice said, “One small step for man, one big crash and splash! You doofus!” What could I say? The menehune was right. I shouldn’t have been so brash. I should have thought my route through, or looked for an alternate route. I should have listened to my Inner Voice.
So here I am, six weeks later, sitting in the waiting room of my orthopedic surgeon. Soon, I’ll be called into the exam room and he’ll hear my story, probably chuckle under his breath as he prods at my still-unhappy knee.
“Doofus, doo-doo-dee-doofus!” My inner voice sings. “Bet you’ll listen to me next time?!”
“Can it,” I exclaim. “You were right. I was wrong. Let’s get this wheel fixed so we can get back in the action.”
My inner voice smiles, then throws me a wink just as the nurse calls, “Mr. Mead, the doctor will see you now…”