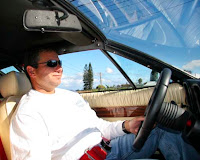 Three weeks ago, one of my best friends passed away suddenly. Robert “Bobby” Stuhr was one of those special individuals that enter your life, bore themselves deep into your soul, and your life becomes a memorable ride.

I had met Bobby in Las Vegas at a Pantera club convention many years ago. We both owned one of these semi-exotic sports cars (Italian made with a big American V8 powering it). I was shooting the event for the club and leading some of the driving excursions. Bobby was there having the time of his life – seeing a few hundred Panteras instead of the couple that were on Maui at the time; getting rides on the race track from fellow owners; and drooling over the myriad of parts the vendors had brought to tempt pocket books.

Fast forward to 2001: My wife and I started contemplating moving to Maui, but my car was an integral part of my life. Was I on my own to fix things, or was there someone on island who could work on the more complex parts of the car? Would the car rust out in a matter of years, and God forbid the car need body work, was there a body shop that could be trusted to repair the delicate bodywork without smearing 200 lbs. of Bondo on the car?

I pulled the club’s membership directory from the bookshelf, grabbed the phone and dialed Bobby’s work phone.

“Detective Stuhr,” said the authoritative voice on the other line.

The minute was more like an hour. Yes, there’s a guy on island that not only works on his and others’ cars, but he’s restored two Panteras. Someone else had a body shop, and he had previously worked for the largest Pantera dealer in the U.S. No worries – he had painted hundreds of cars. And rust? Well, everything rusts in Hawaii, but if you live away from the ocean (especially Upcountry), keep the car covered in a garage, it’s no worse than most of the rest of the Country.

A few years later, I’m pulling two boxes off the ATA Airlines baggage conveyor at Kahului Airport. My first of many trips I would make, flying back and forth bringing “essentials” to Maui. I climb into the SUV we had sent over and head to the house we had rented the week before. In the empty living room, I open a beach chair, sit down and dial Bobby’s cell number.

“Hey Robert, its Scott. Guess where I am?”

His reply was short and succinct: “You’re coming over for dinner tonight. Here’s how to get here…”

Half an hour later, I’m hopelessly lost in the dark depths of Haiku. I call him and he guides me to his home, where I meet his (then) girlfriend (now wife) and kids and we talked story while sipping beer and he charred a few massive steaks on the barbecue. As the night grew long and we talked about the cars we loved, the inevitable bond and friendship began.

Over the years, we worked on and polished each other’s cars, went on car runs, showed our cars at every opportunity and even formed a Hawaii chapter of the Pantera Owner’s Club of America. Bobby had T-shirts made and we wore them proudly. Everywhere we went, I had my “monster” DSLR camera, while Bobby had his point-and-shoot, each of us capturing the day. A few times, we got the cars together as a group and I’d fill up memory cards, printing a few and threatening to take pictures with us in them.

Up until November eighth, we’d get together whenever we could, though never often enough. Bobby was an investigator for the Maui Police Department, and was on-call 24- hours a day. My photography business had also turned into a seven-day proposition with few weekends off. When our calendars aligned, big horsepower V8s would be fired up and we’d burn copious quantities of high-test fuel with my camera riding shot gun.

One of our favorite runs was a trip up Haleakala Crater. My car was in the body shop for its bare-metal restoration and I was Bobby’s copilot. He carving corners and me hanging the camera out the window getting shots of the other Panteras in front of us.

Last Sunday, we made the same trip up the volcano, but this time, Bobby’s ashes were in the passenger seat of his car. One last run to the crater, gracefully nailing the apexes of the corners, enjoying the clear weather and the sound of the exhaust echoing off the volcano walls.

Back home, I pulled into the garage and let the Pantera idle for a couple of minutes, feeling the “blap-a-doo, blap-a-doo” of the big-cam exhaust reverberate through my body before shutting down the engine. Above, somewhere in the universe, I knew Bobby was looking down with a huge grin on his face, and I could almost hear his voice say, “When do you want to do that again?”

Next weekend is free, and the camera is already in the car. I think Bobby will be there too. He could never pass up a ride to the volcano or shoot some cool cars.