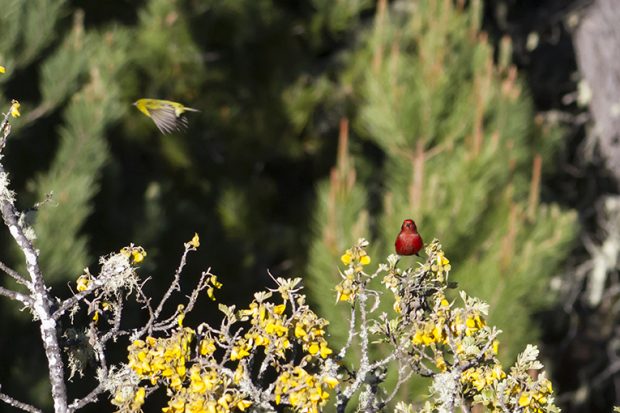 Hosmer Grove Fly By: An Appapane Chills on a Mamame Branch, while a Green Amakihi Flies by

By nature (no pun intended), outdoor photography is usually a solitary endeavor —  a photographer trekking with 30-plus pounds of gear, searching out the perfect scene, and spending hours waiting for that one special moment in time to be captured with silver metal halide crystals or a digital sensor. I’ve spent thousands of hours on these quests, sometimes coming home with thousands of images, others with nary a shutter click. At popular locations, it not uncommon to run into other photographers, out capturing their own unique vision of a scene. As “chasers of light,” here’s almost always an acknowledgement of the other, and most of the time (before the light is right), we’ll talk story about the location, our gear and rumors of upcoming photo toys.

Sometimes these passing relationships evolve to acquaintances, and with a few, building bonds where true friendships develop. It’s with these that the solitary photographer evaporates, friends trek to a location, shooting side-by-side, and sharing the excitement of the moment – no competition to get the best shot, or maneuvering to get the best composition – aiding each other go home with great images.

Think of it not so much as a bromance, but mutual admiration and respect in each other’s craft.

I had the opportunity to photograph a few of Hawaii’s native birds this week with fellow shooter, David Schoonover. We traveled to Hosmer’s Grove inside Haleakala National Park, where native Mamame blooms beckoned I’iwi, Apapane, Amakihi and Japanese White Eyes to feed on their nectar.

It had been a long time since I had photographed birds, and trying to follow them limb-to-limb, focus and shoot with a 400mm lens was, well, let’s call it, “challenging.” The Mamame is a medium-sized tree, with tight and sometimes inter-woven limbs. Once plentiful, and used for tools such as digging sticks (‘ō’ō), spades, runners for sleds and building material for important houses, the tree is now an endangered species, yet a major food source for Hawaii’s native birds.

David and I spent several hours, doing our best to synchronize our movements to the fleeting birds and getting our lenses to focus on the birds themselves, rather than the Mamame’s limbs or flowers. In between “sessions,” (usually slowly walking to another Mamame or Sandalwood tree), we’d “talk story,” filling each other in on what was happening in our respective lives, going over our “top 10” things we’d like to photograph, gear that’s on our wish lists and potential photo trips.

I oftentimes find it interesting, that no matter how well you know someone, there’s always a bit of trivial information that turns up in conversation – the kind that strikes with, “Gee, I would have never guessed that.” Many a time, it’s a look into their secondary passion: With David, it’s his encyclopedic knowledge of Rock ‘n Roll music, mine is the mechanical love for muscle cars, exotics and classic wooden boats.

Getting a little window to the other’s world, noting parallels in our shot sheets, and having a good time photographing together, we agreed that a multi-day, shooting excursion was definitely in the cards for this year.

With the sun waning behind the West Maui Mountains, and shadows lengthening, we decided to call it a day. Slowly driving down the access road, we spotted an I’iwi, perched on a Mamame branch beside the road. As David slowed the truck, we both grabbed our cameras. The I’iwi turned toward us, cocked his head as if to say, “Does this pose work for you?” We fired off a few shots; the bird let out a squawk, and flew away. David and I looked at each other and smiled – no words were needed. We needed to do this again, and soon.