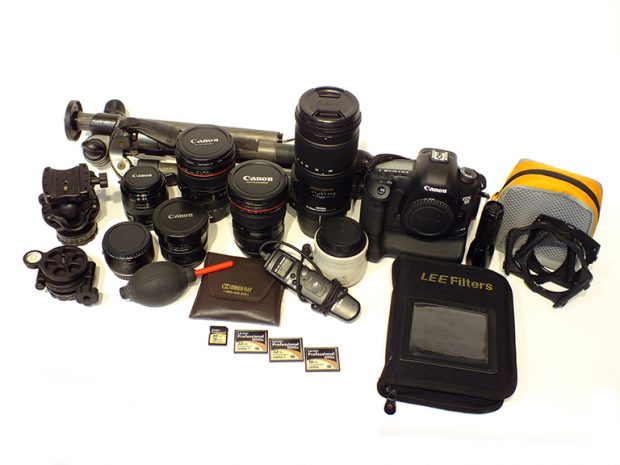 Every year, I make a New Year’s Resolution. And while many people resolve to lose weight, put money away for retirement or deep clean the house (I’ve failed at all three), I like resolutions that are more obtainable, fit my photographic lifestyle and provide a good challenge.

For 2014, I’m pushing myself to hold up two resolutions:

1. Use Every Piece of Gear in My Bag

Open up your camera bag and take a look at everything you’ve got, and not just what’s in between the dividers, but what’s stowed in the pockets and pouches. Now, how much of it didn’t you touch in 2013? Aside from rain protection gear, tools and an extra cable or two, is there a lens, a filter or (gasp) a body that has a layer of dust on it? You’re not the only one. I’m guilty too. That’s why my first resolution is to use every piece of gear I have in my bag at least four times – just once a quarter – or more. I’ll at least know where everything is stashed in the bag, and I’ll be sure to see that it’s all in good, operational condition. I’ll also have to challenge myself to experiment regularly, especially with fisheye and telephoto lenses in situations that I ordinarily wouldn’t touch them.

If we look at our images as a body of work, there’s a good chance you’ll see a theme: Landscapes that have similar elements, a particular depth of field or focus point in macros or a certain positioning of the camera in relation to the subject to name a few. I see this in my own work, with heavily-weighted foregrounds, macros usually shot at f/1.4 to f/2.8 and a straight-forward view of the world. Next year, I plan to shake things up a bit, primarily shooting with unusual camera placements to elicit a, “How the heck did you shoot that?” from the viewer. To accomplish this, I already have a secret weapon: Yoga.

So, those are my two for 2014. I’ve also listed eight more that I feel make great resolutions for photographers. Nearly all came up in conversation with my workshop participants this year, with a few I’ve set for myself in the past:

If I had a penny for every time someone said to me, “I wish I could take pictures like yours,” I’d be a millionaire (well, maybe not a millionaire, unless I went to ‘Vegas and played the penny slots…a LOT). The thing is that people CAN take images like I do, or John Paul Caponigro, or Dewitt Jones or [insert name of favorite photographer here]. All you have to do is take a workshop. Workshops are the best way to intensively get photographic knowledge. While there are a myriad of books available on photo techniques, let’s face it: The best way to learn is hands on. There are two main types of workshops, group and private. In group workshops, you’ll usually spend time with 10 to 15 other like-minded shooters. There’s great camaraderie and everyone learns from each other, and the instructor. Keep in mind that with a group, the instructor has to tailor lectures and practical shooting to fit the needs of everyone, oftentimes taking a middle road (not too basic to bore advanced shooters, yet not that advanced to lose beginners). The other is a private workshop, where you work one-on-one with the instructor. While generally more expensive than groups, you’ll have the instructor’s full and undivided attention, so they can hone in on your skill level and quickly elevate your technique.

Over the years, you’ve probably accumulated a couple of camera bodies, probably three or more lenses, a flash unit, an assortment of filters and a good, sturdy tripod. Oh yeah, don’t forget the camera bag/backpack that houses it all. Now suppose it all went away in the blink of an eye – fire, theft, natural disaster – could you replace it all? Your home owners or rental insurance will cover a portion of the loss (based upon what you can prove you had, and counting in depreciation), but it won’t get you back your gear. Thankfully, there are a host of companies that insure photographic equipment at a replacement value. The big bonus is that many photographic associations (such as ASMP, NANPA and PPA) offer members a discounted rate on equipment insurance. Some insurers will also cover the computers you process your images on, plus your photo printers (Rand and Chubb are two of the largest insurers) If you’re not covered, CYE (Cover Your Equipment) pronto.

The debate whether to shoot in RAW or Jpeg has been fought ever since the dawn of digital. And while there’s a myriad of articles on the web that offer a plethora of arguments for either side, there are some basic fundamentals that can’t be ignored: Your camera always captures the RAW image. If you set the camera to capture in RAW, it just writes the file. If you set it to Jpeg, then it processes the image to a Jpeg file, and tosses any un-used data. Shooting in RAW (or RAW + Jpeg), you get to “develop” the image the way YOU want, and making changes to the image (bringing up the shadow detail, adding vibrance or reseting the white balance) doesn’t destroy the pixles, as data noting the change is merely added to the end of the file string. For those who fear that they’ll be chained to their computers, fret not: Develop only those images that are the best of your shoot. Why waste the time if you’re not going to use them? Where I see the big benefit shooting RAW is in the shadow details. Where Jpeg processing throws away precious dark details, RAW processing can bring them back, giving images a deeper tonal curve.

One trap many photographers get lured in to is going back to the same location over and over, literally shooting it from every conceivable angle, until it’s literally shot to death. Sometimes we need to break the habit (and our comfort zone) and find new locations. One of the easiest ways is to look inline or consult a guide book. If you belong to a camera club, ask the membership for location suggestions. Or, if you’re like me, I get in the truck and take a scouting drive, parking once in a while to look at my topo maps or check a satellite view of the area. I’ll always ask a local what they think is the most beautiful place they’ve seen in their area. Chances are, they’ll point you in the direction of a winner.

For many a photographer, this is the number one resolution to keep, but it’s often the most broken. With “life” as hectic as it gets at times, it’s easy to put capturing new images on the back burner, and do it another day. But consider this: your photographic technique is only as good as you make it. Take athletes or example, they practice and train all the time, and usually the best are those that are practicing day in and day out. The same goes for photography. If you haven’t shot in a month or two, you’ll probably be a bit rusty. Shoot on a regular basis (at least once a week), and you’ll be able to react quickly to changing light or weather conditions, and make necessary camera adjustments to get the shots. For me, Wednesday is my designated shooting day. Some days I have a plan with locations chosen and corresponding times to get the right light. Other times I freestyle and head in a direction dictated by the flip of a coin and let the images come naturally. How you do it is up to you, but you should consider putting a regular shooting day on your calendar.

8. Get back to basics – shoot film

Okay, I can hear some of you already snickering… “You want me to shoot film? Are you kidding me?!” Yeah, I dare you. Wait – no, I triple dog dare ya! Here’s the deal — we’ve become so accustomed to digital’s “green zone” and instant gratification that many people have completely forgot three cool and basic things about photography: Purposefully framing for composition, contrast and light, knowing that you have 24 or 36 opportunities to get the “right” shot; putting trust into yourself, your equipment and light meter, to get “the shot” without the safety net of a 64GB card; and anticipation of the image, as you won’t know if you succeeded until you get the film developed. Yes, there are pros and cons: You’ll have a hard time finding a lab that still process E6, yet you can get print film developed at your local Costco for $1.66. Here’s what I’ve found – by shooting film from time to time, I find that my digital images are more accurate, because I’m setting my Canon 5D MARK III up like film, and I’m thinking film. However, I can develop them when I get back to the studio, and not wait to get the film back from the lab.

9. Set goals for your photography

The sky’s the limit with this resolution. The goal can be as simple as trying out a new type of photo paper, or playing more with depth of field. If you want to go big, you could take on a project for a cause or as vast as getting yourself published. The important thing is to set a goal (or goals if you’re ambitious) that are attainable, and be about an aspect of your photography that you have always wanted to tackle. More importantly, as you take that journey towards your goal, have fun with the process and revel in the excitement of finding something new.

10. Teach someone how to take better photographs

This last resolution isn’t for everyone (some people just don’t like to give away their “secrets” or sharing in general), but for those who do take it on, it’ll be one of the most rewarding resolution you’ve ever kept. When I’m showing my work, there isn’t a day that goes by where someone hasn’t said, “I wish I could take pictures like you do.” For me, it’s extremely gratifying to take someone out, teach them how to use their camera, give them the tools and show them the techniques to get great shots anywhere. But it’s when they look at their images, their faces light up as the have their, “a-ha” moment, that I know they get it, and the knowledge has been paid forward.